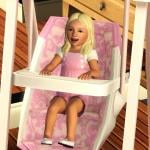 sparkfairy1 Posts: 11,453 Member
November 2014 edited November 2014 in The Sims 4 Game Feedback
I'm a family player-I've always loved creating families in sims, starting a family from scratch and watching as my family progress over multiple generations. I can play one family for years-and I loved seeing their progress from the original sim down to my current sim with a family tree. I love how different each family can be from another previous family-they all have different traits and it's so funny to watch the family dynamic in each family shift. I used to look at my family tree with pride-I would look back at all their photos with fond memories of the time I shared with those sims.

I love toddlers-they have much more personality than babies and are the start of a beautiful relationship with their family-their siblings and parents are challenged by them but they are very rewarding. They have so much potential for fun and mischief!

Babies in the sims 4 leave me cold-I really feel that making them be stuck to the bassinet is such a loss-with multitasking being the amazing new tool in the sims it seems ridiculous that they can't utilise that for new parents-the time when sims need the most help!

At first I was hopeful they would finish this game and add the omissions from family play. But given the lack of announcements and the patches being anything other than family play related I worry.

I felt like we really need to make it glaringly obvious to EA that family players exist given the lack of acknowledgement for our play style being thrown out-and that the omissions from sims4 can be game breaking for many of us.

I shouldn't have to ask this but please be polite and respectful in this thread-I'm not here looking to threaten anyone else's play-I'm just trying to give a voice to those of us who feel like we are being ignored by EA and want sims 4 to be universally loved!

Feel free to show us what you love about family play in previous sims games, a little story, a screenshot of a family you've loved to play with etc :-)
Post edited by sparkfairy1 on November 2014