White
Sign In · Register
Home› Discussion› The Sims 4 General Discussion
Sul sul Simmers! Join us for the Inside Maxis Livestream HERE Tuesday, October 26th, @11 AM PT! 🎉
October 22nd - It's time for our Friday Highlights! You can check them out here! 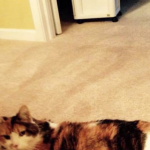 SimSwim2 Posts: 2,477 Member
November 2014 in The Sims 4 General Discussion
I downloaded Don Lothario and a male alien sim off the gallery. After I downloaded it, I found out Don is pregnant by the male alien. He later gave birth to a half alien baby girl named Emalynn. My understanding was when you download stuff off the gallery the mods don't come with it. But, since he was already pregnant when the sims were uploaded it let him give birth.

I thought it was the funniest thing.

He later went on to have twin girls Shannon and Alice with my Abigail Swift sim.
Origin ID: StripedRainbow
7