White
Sign In · Register
Home› Feedback› The Sims 4 Ideas Corner
❄️ The official gameplay trailer for Snowy Escape just dropped! ❄️ You can watch it here.
October 23 - Everyone ready for the Friday Highlight? It's ready for you here.

Ideas for witches in TS4! 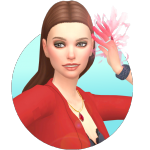 BOY Posts: 531 Member
October 2014 edited November 2015 in The Sims 4 Ideas Corner
after witches are added in any sims game, every sim i make from then on is a witch, including my simself. so obviously i'd love for them to return!
emotions being introduced in TS4 could mean great things for witches. >:)

i'm going to include examples for how the powers i suggest could be used, not just list powers for the sake of it! some ideas are from previous sims games.


1. covens - witches should be able to form covens. they could brew potions together, practice harmless spells on each other, and have powerful spells that require multiple witches in order to be cast. (100% success raising the dead, weather manipulation) - Get Together makes me wonder if the club system could be used to form a coven eventually, seeing as you can create your own unique club.

2. familiars - once TS4: PETS and witches are playable together, familiars should be introduced. familiars would have a more ethereal, maybe ghostly? look (a la Sims 2) and would help witches cast spells more successfully, build magic related skills, could search for collectibles/ingredients for potions/spells, etc.

4. active and passive powers!!! - i think it'd be cool if every witch had one unique power by default. (a la Charmed and AHS: Coven) but there could be a lifetime reward titled "Sorceress/Sorcerer Supreme" that would grant them multiple powers or every power

(*) EMPATHS (passive) - witches with the power of empathy feel the emotions of the sims around them (this would cause some major mood swings... positive and negative moodlets of sims near your sim would influence the emotions of the empath. similar to how the emotional auras already work in game.)

(*) LIMITED SHAPESHIFTING* (active) - shapeshifting witches could transform into cats. in this form they can hunt, search for collectibles, cat naps instead of naps, etc. in their human form there could be a few cute cat jokes/puns as options or something... shedding on furniture, etc. *only available with PETS expansion*

(*) PYROKINESIS* (active) - set fire to sims and lots (like ghosts that died by fire and pyromaniacs + witches in TS3), start random fires when angry, *immune to fire*

(*) ASTRAL PROJECTION* (active) - a whole new way to multitask. this power would be very useful! either the power projects an astral form of your sim that is active at the same time as the real sim, with needs that don't decay, and a timer on the projection once activated. OR just create an astral version of your sim to do whatever - read, cook, clean, etc. - while your actual sim rests and raises their energy. *ASTRAL FORM CAN ONLY BE USED ON THE SAME LOT AS THE SIMS' PHYSICAL BODY*

(*) TIME MANIPULATION* (active) - freeze time on the lot your sim is on. prevent fires from spreading, freeze a dying sim while you convince the grim reaper to spare them, etc *other witches/familiars do not freeze*

(*) IMMORTALITY (passive) - your sim does not age. witch children are not usually born with the same powers as their parents so they will grow old (unless born immortal, then they age up to YA/Adult and stay that age forever), while their parent stays young!

(*) TELEPATHY/MIND CONTROL (passive/active) - speak with sims and work on your relationship no matter where they are, like cell phones but.. minus the phone. probably useless until you get the the mind control aspect that would allow you to temporarily gain control of any sim.

(*) NATURE MANIPULATION* (active) - master the gardening skill, make all types of plants grow instantly, talk to plants, *plants react to emotions - decay when your sim is angry/sad, bloom when happy/flirty* (with the effect of flowers blossoming at your feet when happy? like plantsims in TS3.)

(*) AURA READING/MANIPULATION (passive/active) - your sim can see an aura surrounding other sims. (green aura = happy, red = angry, pink = flirty, etc), your sims can manipulate the aura of another sim to change their emotion at will.

5. spells - learn from spell books and ancient tomes, including white magic + black magic books! magic duels! your sims can also fill the pages of their own book of spells to pass down the family tree. wands optional.


i think that's all i've got for now, lol... what are your ideas and what do you think of these?

***edit:
1: if that old rumored magic university pack is released, please do not make it so that we have to send our sims to the university to be a witch/use magic! and please let witches remain a life state, not just a minor skill or object for normal sims.

2: updated some things for recent GPs and EPs, a few things are now in game that could be expanded upon with the eventual addition of witches: