White
Sign In · Register
Home› Creative Corner› The Sims 4 Challenges, Stories and Legacies
October 23 - Everyone ready for the Friday Highlight? It's ready for you here. 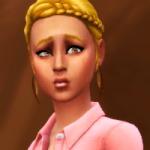 I just wanted to create a thread where I can post links and updates to the blog that I have created to host my challenge story. I absolutely love reading ISBI's so I thought I'd go ahead and try out one of my own Sims 4 style and all.

My founder/torch holder is Ms. Rosie who is an adaption from a Sims 3 heiress that I used to play back when I did a prettacy challenge. I loved having her in my game so it will be fun to see what she will be like in my current game.