White
Sign In · Register
Home› The Sims 3› Creative Corner› The Sims 3 Game Tools
September 24 - Everyone ready for the Friday Highlight? It's ready for you here! 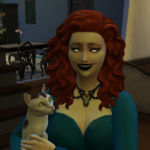 cmbaker16 Posts: 9,139 Member
August 2014 edited August 2014 in The Sims 3 Game Tools
This is a long shot as I’m not sure if any world creator’s take on request but I have this idea for a world (I’ve attempted it myself but CAW doesn’t seem to like my comp.) and I was hoping someone could create it.

My idea is a desert town built within a crater where a meteorite fell.

World doesn't have a name yet- This once empty desert has become a place for scientist and those into the unknown to study the meteor and it’s secrets. Where scientist believe there’s a reasonable explanation for the meteor landing, others believe it’s the work of Aliens. With nether group giving in, only their discoveries will be able to tell them the truth.

I’d like a medium size world, if possible but it’ll be up to whomever takes on the request once you’ve seen what I’d like in the world. Houses and Community Lots don’t need to be pre-built unless you want to for whatever reasons as I’ve read somewhere that some creators like to build in the community lots for placement reasons or something like that.

All base game rabbit holes

I’d also like it if the lots were spaced out and not in a cluster exceptions would be like a plaza type lot where you might have the Theater, spa and bookstore. I’d like it if the science center was out on it’s own. I’ll draw out a sort of diagram to give an idea if it’s needed.

I have All Eps and Sps except KPSTs, Diesel & Movie Stuff. I own Hidden Springs, Dragon Valley, & Monte Vista in case you want use the rabbit holes from them.

This is my first time requesting for a world so I hope I covered everything let me know if you have any questions.
Post edited by cmbaker16 on August 2014