White
Sign In · Register
Home› The Sims 3› Creative Corner› The Sims 3 Game Tools
September 24th- It's time for our Friday Highlights! You can check them out here! 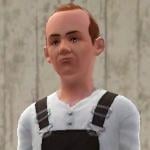 The next picture is an overhead shot of the Central District. The street closest to the water’s edge is called Beach Boulevard (abbreviated “Blvd”). The lots on the water side of Beach Blvd are (from left to right) an empty lot, a port which is occupied, Housenfluke Beach, a residence called Great Island View which was built for this world, and two more ports of which one is occupied. The road coming into beach Blvd on the left and leaving the Central District on the right is called Island Circle. The next picture is an overhead view of the Far Side. Along the water’s edge from left to right are an empty lot, a resort called Hernando’s Hide-away, the Far Side Beach with Mellow Manor behind, a port occupied by the Floating Fortress houseboat (IP), two houses, two more ports, and another house. These three houses were built for this world. Across the street from the resort is the Far Side Dog Park and Herb’s Herbs.
The road leading up the hill is called Centennial Highway. There are seven houses and Patty’s Natural Baths (Katy Perry stuff pack) community pool in the valley behind the Far Side beach area.
Leading off of Centennial Highway is Fish Camp Road. On the left of it are 4 houses and on the right is a fishing pond, a small house and one of the original farms. Our tour continues on Moldenhauer Island which is across from the Entertainment District. The cove portion of this island faces the Entertainment District on Housenfluke Island and is at the top of the picture below.
Schwerdtfeger Road runs along the water front. Starting at the left are two ports of which one is occupied, a residence, an empty lot, Mick’s Master Karaoke, Lowdermilk Science Facility, Cruzita’s Groceries and Diner, Moldenhauer Beach, two more ports of which one is occupied, an empty lot and at the end Grady’s Junkstop. In the hills behind the junkyard is a house. Above this is the Forest Fishing Spot (Fortunate Fishing from IP) which has fresh water fish. The path leads to Sunset Beach on the far right of the island.
Chiechi Road runs up from the beach by Cruzita’s into the left part of the island. Along this road are Synatschk Souvenir Shop (Green Roof), the Lake Pillsbury Resort, Moldenhauer Graveyard with a small fish pond, and six residences. A foot path continues off the end of this road to North Beach. Another foot path leads from the residences to two more ports one of which is occupied. A foot path runs out of the back of the resort to Coveside Beach which has BBQ, tables, chairs, see-saws and swings. There is fishing, gem and insect hunting. From this beach another foot path runs along the water’s edge to an occupied port. That ends the tour. I hope you enjoy this world.
Acknowledgements
Auntielynds’ catalog of tutorials and information has been the total foundation of my knowledge on this subject. I could not have made any progress without reading most of them. I used the IP ini files and colors copied and published in this thread. I especially liked and followed the steps in “Building a World Parts 1 – 12”.
Mr. C deserves credit for maintaining his world index. I have used it several times to find worlds that I would like to play and now will use it to advertise this world.
My wife and granddaughters deserve credit for showing me this game which I have been playing since Sims 1. I can still remember my wife crying out in surprise as a Newbie did something she didn’t expect.
I appreciate the contributions of EA for providing CAW. It is a whole new aspect to the game. I hope Sims 4 has it (hopefully beyond beta) and CAP.
Enjoy and write if you have a chance!

RRArtie – Railroad Artie because I do model trains too!