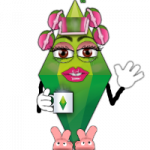 I would suggest to do this only for extreme cases.

A little back story? or tl;dr
I ran into a problem when my World got big. Once I added many built lots to my world, adding more lots would make EIG crash. Not only crashing when saving, EIG would not let me place any new lots; Open EIG- Bang! -It'd crash.

I searched all over for a way around this problem.
What I found was suggestions of cutting back on Store stuff; editing game files such as 4GB Patch; editing the DCCache to increase the save size; deleting cache files (of course; saving more; Using a batch file to start EIG; DEP for game exes; Edit my GraphicsCard/Rules.sgr files; etc…

Pretty much all I could find was telling me to not use much Store and reduce the world size. Best thing- not to use any Store Stuff or upload lots for people to add to an empty world.

Made me sad because that was what I wanted; A large world with a lot of the Store stuff, especially the PC stuff and themed to my world. Why buy the Store if we can’t use it?

For a time I gave up; Nothing was working to allow me to finish my world.
I decided to make my world smaller. This made me think of all the worlds I had backed up and restarted and how I could and did move layers.

Layers are fun and easy to move around in the same world files now that I understand them more; If there is only one layer in an old world save, we can move all our other layers from the newer to the old world. Once I found I didn’t have to use S3pe to read all the layers, it wasn’t much work- unless I was redoing my world to make it smaller.

Ah, but there’s the rub. Moving layers such as trees, runs into its own problems- which got me to thinking about the lots folder.

I can move the lots layer/folder with S3pe but then it kinda messes up all the lots. I don’t want to do that; mainly because I’d still have to redo each lot.
Which lead me to think about placed lots, they’re not only saved on the lots layer but their information is in the Lots folder…

Saved in the Lots folder… hmm… So, I moved lot information from one save to another, and it works!
As long as the lot is the same number in the layer of the world it can be changed in the lots folder; Nice, right? No S3pe, no hex numbers, just moving lot files.

If this was something a lot of people knew but didn’t tell me (like no one sharing the upload unlimiting program in 2010), then it’s sad that no one helped when asked…

Let me try and explain the convoluted steps I do to get my lots past the size/Store limit… (the first time it seems complicated but it's not, just tedious).

3.Backup your CAW World file you plan on testing- the World Folder and .world file

4.Clean out your CAW folders to make it easier to work. Move your backups/world files you’re not using to Documents or Desktop.
One World Kept

7.Rename the 10 lots you need to add in EIG (move them to Lots layer if you just made it). This will be the quick and easy way to test.
(do this by clicking on your lot and hitting the space bar- the option to show in layers will show up- click on it). Your lot will be highlighted, if not click on an open area on your layer box and it will show. Rename it on the Layers and not in the property box.
Choose Lot
Lot in Layer


8.Save/Close CAW …Delete cache files in The Sims 3 & CAW again (cause I like too)

9.Open CAW/World folder in Documents
*Make a New Folder- Call it Test A
*Copy your World folder and .world file and paste them into Test A folder
New Folder

11.Drag the .world file into the Batch file on your desktop
(having read the batch instructions)

12.Go into Edit Town and add lots slowly*and Move Slowly.* It's your partial world files, it can be delicate. (Don’t be scared at what you see, it should change to normal unless you enter a lot… XD )


13.When done, move view low to ground cause I like it. XD

17.Open CAW; Open your Main World to check on the lots

..... So, this is how I added about 50 lots, redid lots that were missing stuff, built later, new Expansions/Store lots, or had to be added later. :shock:

I’m also able to add Sims to a world with only the lots and Global layers… and place them into the main file.
The world won’t load to add Sims so I had to test because I was curious and maybe for future use/knowledge. 


Testing comments? Who's got time to try it?

*If your computer can't run CAW and EIG without much Store (1GB) then I don't think you should try this.

Be careful... I take no responsibility if you didn't back up your world files. :shock:
4