White
Sign In · Register
Home› The Sims 3› Help Center› The Sims 3 Mac Discussion
January 8 - Is everyone ready for the Friday Highlights? Check them out here.
Welcome to all new Simmers joining us over the holiday season! 🎉 Have fun on the forum and please make sure you check out the forum rules and
the rules about necroposting.
December 22 - It's the time of year again: Join the 12 Days of Simsmas! 🎄 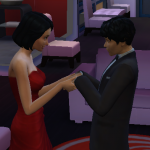 KittyKatie Posts: 276 Member
March 2013 in The Sims 3 Mac Discussion
Hey so I bought the sims 3 around 3 weeks ago then seasons a week later, I run the game on imac 27".
But I seem to be having problems updating the game to 1.50.56 through the game launcher. When I try to update a box comes up saying 'downloading..' But then the box disappeared with no error message or nothing. I have tried several times. I then refreshed the page and it said the update is still available.
Is there any alternate route to updating the game? I have tried manual updating with superpatcher but due to slow Internet connection it is not the best option. Any ideas as to what the problem may be?
1