White
Sign In · Register
Home › The Sims 3 › Help Center › The Sims 3 Mac Discussion
February 21 - Everyone ready for the Friday Highlight? It's ready for you here!
February 14 - 3rd vote results for the Community Stuff Pack are ready!

Understanding how The Sims 3 runs on a Mac. 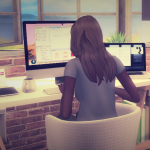 BluebellFlora Posts: 7,076 Member
May 2012 in The Sims 3 Mac Discussion
I know that the majority of you understand about Cider and how it works but it also seems like a lot of people don't and maybe explaining it might help describe why us Mac users generally encounter so many bugs, glitches and general unstable behaviour on our Macs.

The reason why we can play (or try to) TS3 on our Macs is because a company called Transgaming licence a piece of software called Cider to developers in order to make their games Mac compatible. From Transgaming's website:

"Cider™ is an extremely powerful technology that allows games to be released day and date with their PC counter-parts giving publishers significant upside revenue potential and leveraging marketing and branding initiatives. Cider also allows publishers to release either dedicated Mac versions of their games or PC/Mac hybrid versions (i.e. both versions of the game in a single box)."


Cider works by 'wrapping' the Windows written game into a Mac compatible format. Your game thinks it's running in Windows, not OS X:

"Cider works by directly loading a Windows program into memory on an Intel Mac system and linking it to an optimized version of the Win32 APIs. TransGaming's Cider implements common multimedia Windows APIs such as Direct3D, DirectInput, DirectSound and many others by mapping them to Mac equivalents."


However, Transgaming also make the following claim on their website. This directly follows on from the quote above:

"This allows games to run with equivalent game play and performance but without the typical brute force porting effort typically required to bring games to Mac."


I have not come across any Mac users on these forums, my own blog and website, or any other sites and forums who can say that their game is running "with equivalent game play and performance" to that of a Windows user. I have the game installed in OS X and in Windows 7 on the same Mac, below you can see the differences in graphics settings between the two:

Windows (ignore the pixellated bits - I had to change to windowed mode because I have no idea how to Print Screen!):

I have the option to go to 8 for High Detailed Lots in Windows, only 4 in OS X. In Windows I get 50fps, in OS X I get 25fps. Objects render instantly in Windows, in OS X there is a couple of seconds delay. Overall gameplay is smooth in Windows, in OS X it gets slightly choppy. Bear in mind that I am using exactly the same hardware for both operating systems.