White
Sign In · Register
Home› The Sims 3› The Sims 3 General Discussion
July 20th: The latest patch is live! To read the patch notes, click here
July 23rd- It's time for our Friday Highlights! You can check them out here!

What's one of the scariest things you've experienced in Sims? 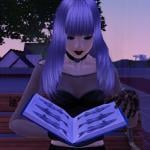 I'd have to say my first terrifying encounter was in TS1 when I saw a ghost for the first time. They weren't fun like TS3 ghosts, they were creepy, green and scary music played whenever they appeared. It didn't help that I was alone in my house at 3am.

Then of course, the first time I ever saw Grim in TS1, that was pretty traumatizing. He wasn't funny or lazy like the TS2 or TS3 Grim, he was evil and he shouted in this other worldly demonic voice when he'd take a sim's body. Something fun I'd do with him though, when a sim would die and curl up in a ball, I'd put "move_objects on" in buy mode, move their body under a couch and Grim could never find them... but the death music kept playing. :shock:

Now that I think of it, most everything in TS1 was creepy.

Another creepy instance was in TS2 for PS2. In that version, if your sim dies and becomes a ghost, you're still controlling them. They don't go away, you're still stuck with them and they are terrifying, especially when they haunt other sims. They can deform their faces and fly around them and puke on them. Overall just terrify them. Whatever happened to being a friendly ghost? :roll:

Then of course, the first time I ever accidentally let one of my sims in TS2 die. I was so freaked out that I immediately shut off my computer and walked away. Couldn't even face saving the game if it meant Grim would be there when I turned it on.

In TS3 so far, I don't think there's been anything that's scared me in particular...