White
Sign In · Register
Home› The Sims 3› The Sims 3 General Discussion
October 16 - Everyone ready for the Friday Highlight? It's ready for you here.

Wait... The Showtime Interview with Arron Conners was cancelled? 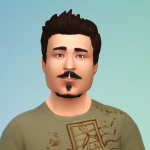 Bafendo Posts: 2,127 Member
December 2011 in The Sims 3 General Discussion
Seriously, CLP mentioned this. Anyone know if it's true/have a link?
0