White
Sign In · Register
Home› The Sims 3› The Sims 3 General Discussion
Fresh off the press - the May 11 Laundry List! Click here to find out more!
April 30 - It's time for our Friday Highlights! You can check them out here!

sims music in America's next top model? or am I going crazy? 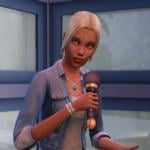 claritysf Posts: 384 Member
December 2010 in The Sims 3 General Discussion
I was watching America's Top Model on CW channel and I noticed they used the music from The Sims 3 in two separate episodes. I thought for a moment I left the game running on my computer and then realized they were using it in the episode.

So strange. Did anyone else notice that?

To check out what I'm talking about, Here is one example: Go to the CW website. Click on episode 9 and go to the very end when they're judging the candidates. You'll hear the music from Sims playing in the background while they're deliberating over the final candidate.

Someone tell me they heard it too so I don't think I'm losing my mind!