What is the weirdest thing that ever happened to you when you playing on any sims game? 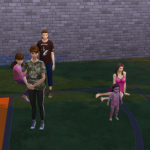 Mikayla_Rose_Graham Posts: 17 Member
October 22 in The Sims Franchise Discussion
The weirdest thing that happened to my sims that’s when my sims walking through the wall (Sims 4) also my toddler sims has this shrink bugs.
Mikayla Rose Graham been playing the sims since 3 years
2