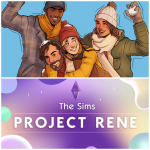 simmerorigin Posts: 585 Member
October 21 in Project Rene Community Discussion
This thread is for simmers looking forward to Project Rene. The negativity thread is here.
He/him | Simmer since Sims 1 | Wants-based rotational player | My gameplay rules via PleasantSims | Bring back challenge and depth to the Sims: https://forums.thesims.com/en_US/discussion/comment/17959464/#Comment_17959464
4